Anniversary year six and anniversary year seven have been vastly different. I've pondered over the reasons for this difference.
First, I really do not have much new to say In my blog and my life is becoming further emotionally removed from the everyday life of grief and sorrow.  I really don't feel grief daily at all any more. This website is "hope for grieving mothers" and I believe that I truly am example of hope. When I was in total darkness, I sought these types of lights to guide me. I needed hope.
Second, I've also suffered other great devastating losses. Without detailing my family and the situation, I've been very focused and sorrowful on these other surprising losses.
Most importantly, I have recently made some decisions to move forward into life and living.  I've been in a holding pattern for several years and I've decided to plant myself here in indianapolis... To actually live here. I have recently bought a new house and I have moved.  In the month of JULY!  I said from the beginning--  God help everyone around me!!!
During this month of stressful changes, I have realized that anger is a more comfortable emotion for me than sorrow. Who wants to be sad when we can get mad and blame someone else--  example:  the other realtor for making the closing difficult with not having the sellers power of attorney in order.  My cousin Denise finally said to me--  "Pamela. What are you really upset about?"!  I realized that I was upset about everything and I couldn't define it!!  Truthfully--  My neatly arranged ducks were no longer in a row and had been tossed out of order.
So--anger is easier than sorrow. I don't like change even if it's really positive. And I don't like July.  I can't still dread this anniversary month. When I rediscovered some of his belongings yesterday during the last portion of my move, my energy was zapped. I cried when I saw his notebooks with his handwriting and his school ID card. Items tossed in a box five years ago straight from his room--  and haven't been touched since. Tears are natural and healthy, but I felt weak. Physically and emotionally weak.
Here is my fb post for the seven year anniversary of my sons death. Thankfully, when I think of him, I usually think of him living, instead of dying. This is a shift I'm grateful for. Please read....
"So much has changed in the world and in our lives since Logan died, seven years ago today. His friends and family have served in the military and have graduated from college and have gotten married and have had babies. He would be over the moon for his aunt Dana's little Zoe and also for being an uncle to Ellyanna. We didn't have smart phones and constant technology at our fingertips... And FaceTime!  He would be all about an iPhone and an iPad-- and shocked with delight that grandma and papaw BOTH even use an iPad!  His entire family has changed in unfathomable ways.  I've thought a lot about the lessons from this July--  the lessons for all of us as I have pondered Logan's life and his death.
1) I invite all of my healthcare provider friends to recommit to the understanding that the negative outcomes often occur during the most mundane and average days...  And often from a series of subtle and innocently appearing events that cumulatively create a trajectory that cannot be reversed. BE AWARE!  Logan died at home after an outpatient surgery. Do not be the weak link in the chain!!
2) Sleep apnea WILL shorten your life. At the age of 17, it was later discovered that Logan already had moderate cardiomyopathy (heart problems)  as a result of his sleep apnea.  Please google "sleep apnea" for more information and discuss this with your physician. It brings joy to my heart when people do this.  Sleep apnea really isn't AT ALL about being too tired.
3) Reflect.... "What legacy am I personally leaving in this world?"  Do all of these things in honor of Logan. Help create a legacy of safety, awareness, and personal change. Because of the sensitivity regarding the cause of his death, I would really appreciate minimal comments to this post.  Thank you for remembering Logan today. He is at home and at peace in the kingdom of Heaven... But one day a year it's okay just to be sorrowful or even angry- for we were robbed of so much as he was unintentionally ripped from our lives." 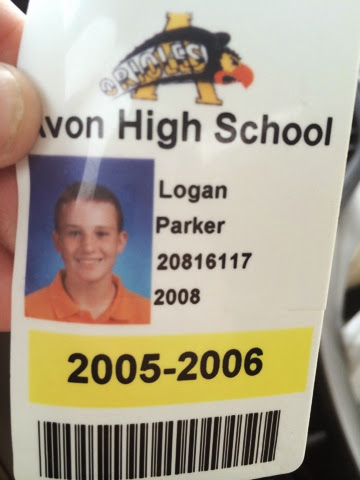