When my children were young, I could not take a bath without one of them interrupting me.  My daughter would wait until I was settled in the tub and then exclaim "I need to go potty!"  Although we had three bathrooms, she would always want to come into the one where I was laying in the tub - and sit on the toilet and swing her little feet. "So, mom. How are you?"  She did not need to REALLY use the potty, but instead, she just wanted to connect with me. I smile when I think of these moments.
Another lovely memory-- My Logan loved football. He was a gigantic Indy Colts fan. Prior to living in Indy and having Colts season tickets, we had season tickets to University of Tennessee football. Logan LOVED Peyton Manning. Truly, he was his biggest fan. When we moved from Knoxville to Indiana, Logan told everyone that Peyton became a Colts player in order to be near us. :)
I have been intermittently watching football this season. Even my daughter has said- "I do not know who you ARE any more."  She told me today "I wish Logan were alive to see you watch football on your own volition."  True....  Me too. Today I watched Peyton and my eyes filled with tears. Peyton is headed to another super bowl.
So, today I am giving you a glimpse of my life and of my present grief. Logan died eight and a half years ago. In the past year our family has gone through several changes. If Logan were here, I believe he would be so happy in the role of an active uncle and brother in law. Also- He would be cheering Peyton in Denver.
I miss him in a different way now.  lt is similar to how I miss my oldest son because he lives far away -- and my daughter when I didn't see her for a long time. It is like Logan is away at summer camp- except it has been a REALLY long time. I wish I had a video or I could hear his voice... Touch his pimply face... Run my fingers through his hair. These are the things that I miss. I just miss.... My child, Logan. I am finally somewhat resolved regarding how he died.  In fact, I have an unusual upcoming opportunity to make a gigantic difference in Logan's honor.  Logan's story will hopefully impact and teach other healthcare providers about the importance of continuous respiratory monitoring. But--  this blog isn't about Logan or my other living children.    It's sole purpose is to allow others to transparently see and understand grief and then to not feel so very alone. It's purpose is to share the sorrows but also to share the victories. To feel hope for a future.... And there is hope for a better future.
This evening, I would give everything I own just to have him run into the bathroom when I am showering and say "mom, I have a question!"
Although the emotions I felt when watching Peyton played this afternoon unexpectedly caught me off guard, I am glad. I could focus on the fact that we buried Logan holding a towel that Peyton tossed to him after practice one day.  Thankfully that is not as important now.  I can NOW focus on how he LIVED- not just his death.
My Logan was a good boy. He was deeply loved on this earth and he deserves to be grieved. It feels rather embarrassing to cry but the price of true love is eventually pain. Ponder this thought....
Thankful for my memories.  Thankful for the tears. Thankful that the tears no longer shred and destroy my present or my living children's present. I am....  Living for Logan and for me as well. This is currently the best way to honor him. 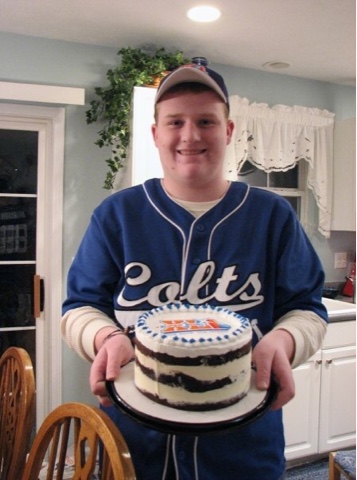