A new anniversary and a new lesson.

Once again I am on a plane. I often wonder if anyone listens to the flight attendants standard emergency information that is stated prior to takeoff. Today, I actually listened to portions of the instructions. "In the event of an emergency, take the oxygen mask and hold it to your face. If you are with others, hold the mask to your face first."
Why did this capture my attention?  When Logan died, I was barely surviving. For the first time in over 20 years, I really could only focus on myself... because I was in survival mode.  I knew that I needed to focus on my living children but I could not think about anything else except the unfathomable reality that Logan died. Logan's death oozed out of every pore of my body as I deeply mourned him. I now understand that it was also important to "give myself oxygen".
At this place in my grief and in my life, I firmly understand the importance of early intervention for families after the death of a child. It was frightening to feel completely lost as I floated out of control in those dark and uncharted waters.
As I was in the process of "giving myself oxygen," I did not feel very maternal. I was broken.  I had been shattered into a million tiny pieces.
My children needed oxygen. I needed oxygen. We all needed encouragement during the first days, months and even years after Logan's death. We all lost Logan. My daughter lost her brother. My son lost his brother. Logan's father lost his child. I lost my child. Logan's death was life altering for each of us individually in different ways. Grief is often very divisive. Grief is a journey that can only be taken alone.
On July 23, we marked the nine year anniversary of Logan's death. I once again realized that I needed encouragement for these days too.  My mind was foggy and I was antsy. I felt like the princess and the pea-with the pea under the mattress, I remained restless.
On the anniversary day, I flew to visit my parents in Louisiana. After arriving at their home, I was surprised with the delivery of a beautiful bouquet of flowers. My daughter and son in law had sent these flowers with the following card "You are the strongest and most wonderful mom that we know! We love you forever!"
I smiled through my tears as I read the words on this card.
Often, I have felt tremendously weak as I recognize my regrets and failures. Survival mode is scary and is miserable.
This anniversary ended differently.  I had the big ugly cry that I needed when I remembered in detail that horrible, life altering, and tragic day. This year the day did not end with sorrow. This year I was given a gift. The flowers were beautiful but the true gift was her words.
This year my daughter helped me recognize that I really have been strong.  How was I strong?  I continued to put my feet on the floor ever single day as I embrace the mantra "grieving forward".  My daughter helped me understand that it was natural that that I needed oxygen too. 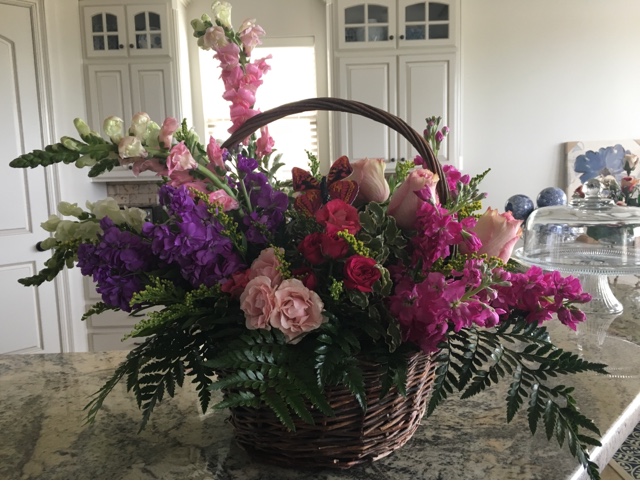